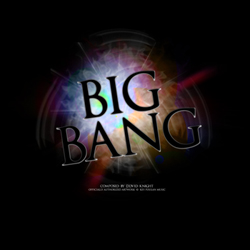 
The Big Bang is the term that refers to the idea that the universe has expanded from a primordial hot and dense initial core that continues to expand to the present day. The introduction illustrates the finite condition the began the the process followed by an ostinato that marks the expansion of space and galaxies. As the ostinato builds in intensity protons, neutrons, electrons, and finally atoms themselves begin to form which ultimately form matter. The matter aggregates into stars and galaxies as the orchestration and ostinatos increase until finally solar systems like our own are formed. While recapitulating motifs from earlier in the piece the ending section also is a harbinger of the mystery of our universe since physics as we know them our inadequate to explain its ultimate fate.