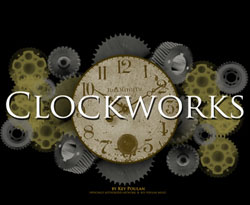 
Describing the inner mechanisms of clocks, Clockworks is an exciting show in a basic fast-slow-fast format, each movement exploring the mechanizations of time and timepieces.

Throughout the show, one hears the various components that make up clocks; springs springing, bells bonging, gears grinding and pendulums ticking. Most of these clock sounds are of the mechanical variety. Some sounds are toy-like, as toys often run on mechanical motors. Other toy-like sounds are heard in music box effects, the mechanism of these devices also being run like clocks.

But clocks and related timing devices are also used to set off explosives and other devices. The anticipation leading up to the culmination of the brash and/or powerful effects of these devices going off creates moments where one knows something is going to happen, but one is never prepared for the big “pow” effect that releases the pent-up energy.

Visual possibilities include references to clock gears as well as large drawings of early computers, such as Babbage’s early counting machine. You can have hands of a clock slowly spin around the clock, perhaps even using the drummers as the hands. Given a little “time,” you’ll think of lots of possibilities.