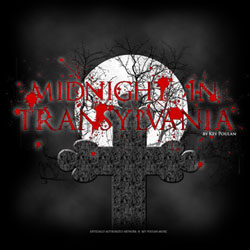 
Few stories have been as persistent and haunting through the ages as those of vampires in the forbidding far reaches of what is now Romania. Midnight in Transylvania captures the aura of these stories as if told over a campfire to wide-eyed youngsters quaking at the slightest rustle of leaves. Set between the hours of 9:00 P.M. to Midnight, the bewitching hours are each introduced by the tolling of a bell (chime), announcing the next phase of whatever is about to happen next when one lets down their guard. The opening commences with nine tolls of the bell. The vampires are about to take over the night and play havoc with anyone who crosses their path. The contrasting section sets the vampires loose on the night as they search for the purest blood of all from the bodies of young and unsuspecting beautiful maidens. At midnight, things get freaky and wildly intense. The vampires are in the midst of their feeding frenzy like a school of sharks going after chum. The music is violent and severe as the frenzy reaches its peak! The shows conclusion is noted by a single sinister chime.