Way of the Storm (IMP) 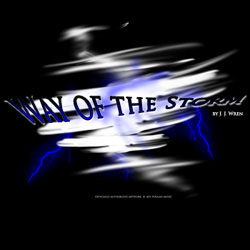 
Way of the Storm is based on the concept of intense thunderstorms and their behavior patterns. The piece begins calm and light, symbolizing a typical day with an early morning drizzle. However, the calmness soon turns to chaos when a massive storm cloud appears in the distance. The ostinatos and dissonances displayed in the keyboard sections present the idea of great pandemonium as people rush to prepare for the enormous storm about to hit. The battery figures support this idea with strong, thunder-like unisons and tasteful solo segments. Near the end of the movement, the storm approaches, closerâ€¦ and closer. When it arrives, a deafening silence engulfs the town, and the first lightning strike hits. The middle section of the work symbolizes the madness involved within the storm. A great deal of motion within all instruments indicates the constant hammering of thunder, lighting, and heavy rain. The last movement of the piece reveals the amount of destruction the storm leaves behind. Haunting melodies in the metallic keyboard instruments tell the story of this unfortunate reality. Then just when it seems as if the worst is over, another storm cloud appears in the distance. The show concept and score were created with both the performer and designer in mind. Yet, the originality of the show guarantees the enjoyment of preparing and performing this piece. So have funâ€¦ the storm is about to hit!