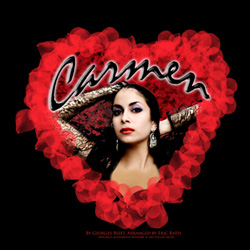 
Carmen Georges Bizet’s opera “Carmen” is one of the most popular and best-known works to come out of the opera theater, its melodies among the most recognizable in the world. Carmen is drawn from the best known of the most beloved of these melodies.

Mvt. 1: "Prelude to Act I" setting up the mood of the townspeople milling around the square in Seville. With Spanish exoticism permeating the atmosphere, Carmen is introduced and begins to exhibit the flair that makes her so appealing to men.
[ Download ]


Mvt. 2: "Intermezzo" is from the original's Prelude to Act III. The music is emotional and allows the guard to interpret the concept through the use of movement.
[ Download ]


Mvt. 3: "March of the Toreadors/Allegro Moderato" The music becomes more sinister and dark, allowing the percussion to explore the more ominous sound effects available. The music segues into perhaps the most famed of the melodies, euphoric and vivacious, comes to the fore as the bullfighter in the storyline is celebrated. While you certainly don't have to take a literal approach to this show, this would be a great spot to do some work with a bullfighter's cape.
[ Download ]


Mvt. 4a: "Finale (Down Ending Version)" is from the end of the opera, where a jilted lover kills Carmen and the famed bells theme peals out, mourning the loss of the title character. The down ending allows the band to capture the emotional content that is synonymous with the death of Carmen.
[ Download ]


Mvt. 4b: "Finale (Up Ending Version)" is also from the end of the opera, where a jilted lover kills Carmen and the famed bells theme peals out, mourning the loss of the title character. The up ending allows the production the ability to move quickly for a high impact conclusion!
[ Download ]