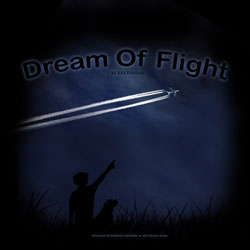 
Throughout recorded history, humanity has been fascinated with the notion of human flight. Once thought impossible, flight is now viewed with indifference instead of as the miracle it truly is. Dream of Flight captures the vivacity of the wonder of flight, reminding us that the ability to fly is anything but mundane, no matter how commonplace it appears to have become.

Starting with man’s captivation with watching and studying birds in flight, through that wondrous 12 seconds at Kitty Hawk and Neil Armstrong’s first footprints on the Moon, this show sweeps the audience along in the whirlwind of frenzy that inspired poets as well as inventors to dream of flight and make it a reality, looking well beyond the moon and towards the vast depths of the furthest reaches of the solar system.

Mvt. 1: "Man Looks to the Heavens/Myth of Legend" may be accompanied by a spoken dialogue that sums up the entire concept of the show, clearly stating the purpose of the production and giving the audience a detailed road map (or rather, space chart) to follow. While you may make up your own dialogue, here's the one that is supplied. "Through clouds above, birds call. There, wings of white inspire flight. Inspiration leads to innovation with thousands of inventions that feed the dreams of men."
[ Download ]


Mvt. 2: "The Wright Brothers/One with the Clouds" takes us from the clanking of building the first powered aircraft to the realization of the first time a powered vessel broke the bounds of gravity to soar into the air, if only for a few seconds. The narration supplied is, "Sweat, steel, wood, and canvas...the tools of invention drive the dream ever closer. Once in flight, the mechanics fade, leaving us joyfully soaring...one with the clouds, sun, and the blue beyond."
[ Download ]


Mvt. 2a: "The Wright Brothers/One with the Clouds (Synthetic)"
[ Download ]


Mvt. 3: "One Small Step" takes us past the boundaries of our blue skies and focuses on the worlds beyond, reminding us that although we have achieved the dream of flight, there is so much more out there to discover, so many more dreams to be realized and so many more chapters of human history to be written. As stated, "We leave behind the mechanical and embrace the technological. What once took years, now takes hours and the dream moves beyond the clouds to the stars. 10-9-8-7-6-5-4-3-2-1...lift-off! The dream fulfilled but never ending...the promise of one waits and challenges dreamers to begin anew."
[ Download ]