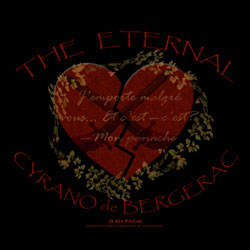 
The story of 17th Century unrequited love fills the Eternal Cyrano de Bergerac, based on the title character of a play-a Parisian poet of phenomenal verse and an equally large nose-that has endured the ages. In this version, the musical storyline is lifted to a modern city, with an urban funkiness permeating the show.

Mvt. 1: "Cyrano Awaits Montfleury" opens with a grand crescendo starting with the keyboards and adding all the other sections to let everyone know something big and bold is about to spring forth. Anticipation is intense as we wait to hear what happens next.
[ Download ]


Mvt. 2: "Cyrano: The Mighty Swordsman and Lonely Poet" commences by showing off his vitality and swordsmanship skills, being brash and swashbuckling. But the oppression he feels by the hideous site of his monstrous nose, and the ache he bears for discerning love has passed him by is heard in the poignancy of the music that captures the desperation that accompanies his love for his cousin Roxane that is not returned.
[ Download ]


Mvt. 3: "Secret Love for Roxane" is quite melancholy and tender. Cyrano chooses to hide his love from Roxane. Think of billowing soft pastels as there is much the guard can do to express this sense of loss.
[ Download ]


Mvt. 4: "Dueling Cyrano Challenges All" is a movement of bright and thrilling intensity where Cyrano takes on all his enemies, challenging them to swordfights and word games. Through this, he momentarily overcomes his hardships and rises victorious in the only ways he knows how.
[ Download ]


Mvt. 5: "Cyrano Reveals His Love With His Last Breath" is when Cyrano reveals to Roxane his undying love with his final gasps of breath after being ambushed. She kisses him and he perishes, finally in the arms of his true love. A majestic ending concludes the show as Cyrano finally achieves his longing to express his devotion to Roxane.
[ Download ]