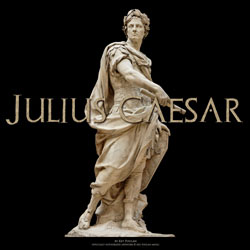 
Julius Caesar was as the 10th anniversary sequel to The Rise and Fall of Rome show which was Key’s first composition for marching band. Julius Caesar draws from the primary musical motif from The Rise and Fall of Rome and takes it on a musical journey through the life and times of the great ruler.The show was originally title “Imperator” (Emperor) for the Millennium Drum and Bugle Corps.