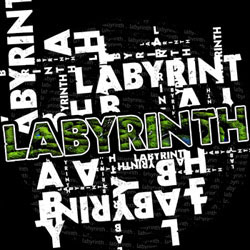 
In ancient mythology, the Labyrinth was a complex maze designed by Daedalus and built by King Minos of Crete to contain the Minotaur, a half-man, half-bull creature that was killed by the Athenian Theseus. Utilizing a metaphoric interpretation of the Labyrinth, the journey into through and the emergence symbolizes personal reflection of one’s life.

Mvt. 1: "At the Threshold" is figuratively the start of one's journey through life, while literally representing one walking into the Labyrinth. The anticipation of what is to be found permeates the opening strains, where anything can happen. The music is hopeful, but also creates an aura of suspense, because one really doesn't know what they are going to find once they enter the physical Labyrinth of the Labyrinth of life.
[ Download ]


Mvt. 2: "Encountering the Minotaur" is where the soul who entered the Labyrinth runs into the great beast and must confront it in order to survive. But it also is where one faces their personal demons. Thus, the music is full of suspense, but also pulses with spectacular bravado.
[ Download ]


Mvt. 3: "Illumination" is the moment when one suddenly recognizes how to solve the Labyrinth and discover the exit. There's a sort of victorious drama to the piece that celebrates this personal discovery, also representing the enlightenment of the garnered spiritual knowledge and insight.
[ Download ]


Mvt. 4: "Emergence and Jubilation" is where one emerges from the Labyrinth, enjoying the success of their journey. This is the triumph one feels when they follow their own path through the maze of life, successfully coming out on the other side.
[ Download ]