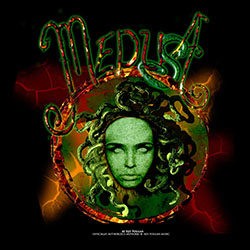 
Medusa explores the personality and life of the mythical underworld goddess who could turn to stone those who dared look at her and her bizarre head of live venomous snakes. The edgy music slithers through the lush harmonies and pulsating rhythms of ancient times, striking out-when least expected-like a coiled serpent to emphasize the menacing anxiety of Medusa’s distorted view of the world.

Mvt. 1: "Medusa Lures Poseidon" offers hints of Middle Eastern music to set the mood for the show. One hears the title character conveying her desire for Poseidon, who is pre-occupied with his affection for the warrior goddess Athena.
[ Download ]


Mvt. 2: "Athena's Rage" highlights the ruthless fury of Medusa's antagonist as she directs her uncontrollable anger towards obliterating Medusa. The music is disjointed and dissonant to heighten the drama of the irrepressible anger, establishing the main theme of the show.
[ Download ]


Mvt. 3: "Serpents" & Mvt. 4: "Gorgon's Pursuit" "Serpents" (Mvt.3) captures Athena's vengeance as she turns Medusa into a hideous snake-headed monster. A slower groove overlaps the main theme. There is a direct segue into "Gorgon's Pursuit" (Mvt. 4) which is a fast and furious piece focusing on the hero Persues' crafty slaying of Medusa, immediately followed with a furious chase of Perseus by Medusa's Gorgon sisters, pushing the show off the breathless edge of the exhilaration meter.
[ Download ]