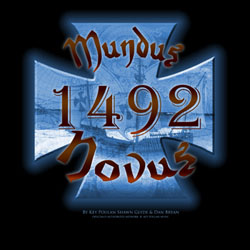 
The discovery of the New World by those from the Old World unleashed perhaps the most significant migrations of humanity ever experienced in either world. While Christopher Columbus may or may not have been the first European explorer to reach the Americas, his journals led Italian explorer Amerigo Vespucci to recognize that Columbus had indeed traveled to a previously unknown continent, a new world. Vespucci wrote about his conviction that Columbus had achieved this feat in his treatise, Mundus Novus, the inspiration for 1492: Mundus Novus.

Mvt. 1: "Preparation of the Caravels in Palos" captures the anticipation and excitement of the caravels (the masted sailing ships) as they were prepared for sailing with provisions and brave men. The wind picks up around the port city of Palos, Spain, (heard in the swirling gusts of the music), enough so that the sails billow and the Niña, the Pinta and the Santa Maria can depart the port. (This is a perfect opportunity to utilize giant sail-like guard props.) The sailors regard the open ocean as a friend that will take them to India to engage in the lucrative spice trade, unknowing it will instead transport them to the New World.
[ Download ]


Mvt. 2: "The Endless Sea" suggests the westward travel of the caravels across the vast Atlantic Ocean, riding the gusts of the wind that make the sails billow, propelling the sailors towards their dream of adventure and riches. The ocean is friendly; gentle waves lap at the hulls of the ships, and the crews are optimistic about the success of their journey, as they are kept busy with routine on-board maintenance jobs. Playful dolphins ride the crest of the ships' bows and Captain Columbus remains positive that his gamble on the unknown will pay off, not yet aware he has severely underestimated the circumference of the earth and the journey he has undertaken will be much longer than anticipated. Still, the unknown is always just over the next wave.
[ Download ]


Mvt. 3: "Fear As Night Falls" finds the crew scared and frustrated as the winds stop blowing and they haven't spotted land in over two months. Some wonder if it's divine providence that they not succeed in their mission. Many want to turn around and go home to the comfort of Europe, some to the point of considering mutiny. The captain stands on deck, watching the endless sky, surrounded by seemingly endless ocean, wondering if it's all for naught. Feeling the fears of the crew, he starts to pray for guidance. Unbeknownst to him, it's the night before landfall.
[ Download ]


Mvt. 4: "Cultures Collide" captures the excitement and uncertainty of spotting land and going ashore to meet the natives. A brief prayer is heard as the adventurers step ashore. The natives, intrigued by the Europeans, greet the visitors in a hearty round of welcomes and the exchange of goods and presents. The trinkets the sailors bring mesmerize the natives, and the jewels of the natives excite the sailors. Columbus remarks that he could conquer and govern the natives as he pleased with just 50 men with modern weaponry, and the music represents this somewhat lack of benign benevolence. (In the original performance of this movement, traditional battery instruments portrayed the Europeans and large 55-gallon drums represented the Native Americans.)
[ Download ]


Mvt. 5: "Stormy Seas / Return to Europe" reflects an intensely different mood of the sea on the return home, so very much different than the peaceful journey the sea provided the sailors on the way to the New World. A storm hits the caravels and makes the ships hard to steer. The seas seem angry, as if they don't want the sailors to make it home bearing news of what they've discovered. The possibility of sinking and being forever lost at sea is on everyone's mind. But then the vessels sail out of the storm, the seas return to a glassy smooth countenance and the crews start rejoicing. The celebration reaches fever pitch when the Portuguese coast is spotted, and the closer they come to arriving in Lisbon, they can see the townspeople run to the docks to greet them. Even though the storm pushed them away from their intended port of Palos, they are most happy to see European soil. After a short stay, the vessels return to the homeport of Palos, where church bells across the city announce the return of the crews and loved ones swarm to the docks to hear about the incredible seven-month journey.
[ Download ]