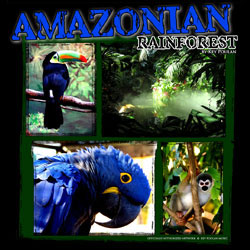 
Amazonian Rainforest is a show that transports us to one of the most exotic, dangerous, thrilling, mesmerizing and beautiful places on earth. The descriptive sounds permeating the production help the audience create an image in their minds of the Amazon River and the deep, tangled forest that offers a surprise around every tree.

Mvt. 1: "Through the Rainforest/The Anaconda" kicks off with a flurry of excitement as an intrepid crew of adventurers hacks their way through the dense jungle foliage and finds themselves face-to-face with a giant anaconda. You will feel your heart beat faster as the giant snake reveals its discontent with being disturbed.
[ Download ]


Mvt. 2: "Rainfall Through the Canopy" brings our racing heartbeats back down to under a few hundred beats per minute. The jungle is almost silent and still except for the rustling leaves being caressed by the falling rain through the canopy of the trees. The audience and performers relax, enjoying the hypnotic effect of the bouncing raindrops on the forest floor.
[ Download ]


Mvt. 3: "The Yagua Natives Hunt With Their Pucunas" takes a look at the Yagua tribe of natives who still hunt with Pucunas, a form of blowgun that shoot poisoned darts. The music is as intense as the chase of the prey, melodic lines shooting to and fro as if flying on the fins of the darts. By the end of the production, you will feel emotionally spent as the music succeeds in taking you as close to such a hunt as you would ever dare be.
[ Download ]