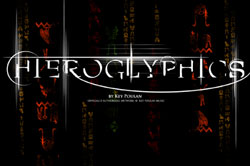 
The world of ancient Egypt was one of wonder from the great pyramids to the tombs at the Valley of the Kings across the river from the Egyptian capital Thebes. Hieroglyphics takes us back in time to when pharaohs ruled the land of the Nile. This ancient method of documentation and story-telling became our link to the past which allows us to unlock the doors to an exotic and ancient world.

Mvt. 1: "Valley of the Kings" introduces the sounds of Egypt, the sparse melodic forms that conjure up the ancient land. One can hear the convoys of camels carrying riders to the Valley of the Kings in upper Egypt, where many of the tombs of the mighty New Kingdom pharaohs were constructed, including those of Tutankhamun and Ramesses the Great. The music builds in awe of the glory of these tombs, constructed over decades by the toil of slave laborers.
[ Download ]


Mvt. 2: "The Golden Horus" represents the pharaoh as the earthly embodiment of the god Horus, the divine prototype and patron of the Egyptian kings. The name is written in the style of the discoveries in the famous tombs that captured the imagination of the outside world. The royal falcon of Horus is seen atop the name. This piece conveys the mystery of these appellations, mysteries that still aren't fully answered today.
[ Download ]


Mvt. 3: "The Royal Cartouches" represents the oval or oblong figure (as on ancient Egyptian monuments) that enclose the name of a sovereign. Regal and majestic, the music proclaims the eternal magnificence of the discovered icons of ancient Egypt and the wonders yet to be discovered. Perhaps some will never be discovered. We're left in awe of what we do know, wondering what mysteries are still buried in the sands.
[ Download ]