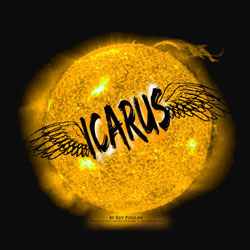 
Icarus is based on one of the central characters in Greek mythology. Son of Daedalus, he and his father tried to escape from the prison of King Minos by wearing wings made of feathers and wax. Daedalus warned Icarus not to fly too close to the sun nor too close to the sea, but his son didn’t pay heed and flew too close to the sun, which melted his wings. With no wings left, he fell into what is now known as the Icarian Sea.

Mvt. 1: "Daedalus" captures the inventiveness of the master craftsman, who achieved fame in many ancient myths for his myriad creations. The melody highlights the ingenuity of Daedalus by creating a sense of wonder that is delightfully inquisitive in nature.
[ Download ]


Mvt. 2: "Departure from Crete" is about the escape from the island by the father and son. But first they had to flee the maze-like Labyrinth where Minos held the half-man, half-beast. Minos was angered that his daughter Ariadne ran away with Theseus, who came to Crete and slayed the Minotaur. Since he controlled the seas around Crete, Daedalus and Icarus had no choice but to fly out from the Labyrinth, which interestingly had been designed by Daedalus. In this movement, you'll sense the danger of the escape plan and the determination of the father-son team as they plot their escape.
[ Download ]


Mvt. 3: "Too Close to the Sun" is where Icarus loses his senses due to the thrill of being able to fly and having escaped Crete. The music becomes wildly out of control as Icarus becomes careless and flies too close to the sun. He tumbles into the sea and we hear the mourning of Daedalus for his dead son. While serving as a warning to pay heed to those who know what they're talking about, the piece ends by celebrating creativity and bravery in the face of overwhelming odds.
[ Download ]