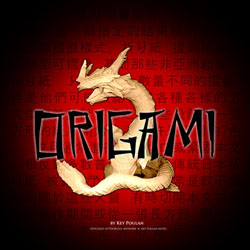 
Based on the ancient Oriental art form, Origami is flavored throughout with Asian influences, including featured Taiko drums. Generally accepted among scholars and artists, origami began approximately in the first century AD in China where people discovered the simple thrill of folding paper into various shapes and forms. Many of these primitive methods survived to this day as basic origami shapes and moves. As the skill of making paper moved across the Eastern world the art became quite popular in Japan where it melded with the culture and religion at the time. Soon the Shinto religion integrated various origami shapes and creations in their ceremonies where they remain until this day. In fact, origami is a Japanese name itself meaning “ori” or folding and “gami” which means paper.

Mvt. 1: "Senbazuru Orikata" is the oldest book on origami. Literally translated as "The Secret of One Thousand Cranes". Legend says that if you build a thousand cranes that your wish will be granted. The show opens with an alto flute solo (cued elsewhere in case you don't have an alto flute) and vocals, climbing through the distinctive Oriental sounds to climax with a sense of wonder and exoticism. The piece then takes off with repeated eighth note figures that convey a Far East sound, suddenly running into a wall of dark rhythms bursting with impact points akin to exploding Chinese fireworks.
[ Download ]


Mvt. 2: "Kan No Mado" ("Window on Midwinter") contrasts the opener with a bamboo flute solo supported by the rest of the band, building up intensity until the beauty has to give way to another huge impact. This first published book of origami models included the frog.
[ Download ]


Mvt. 3: "Tsunami" is set up by the Taiko drums and moves into an aggressive percussion feature. The fury of a tsunami wraps itself around the frenzy that is unleashed by the drums.
[ Download ]


Mvt. 4: "The Satoshi Kamiya Eastern Dragon" highlights each section of the band with segmented technical displays of brilliance. This impressive work of origami by Satoshi Kamiya brings back the main theme from earlier in the show to end with a spectacular splash of zeal as the full passion of the Oriental arts comes to the fore.
[ Download ]