Pamplona! – The Running of the Bulls (Full Instrumentation) 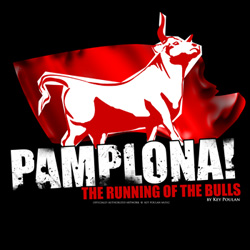 
Nestled in the mountains of Spain is a town that has become world famous for its once-a-year pitting of careening bulls and sprinting commoners in its streets. Pamplona! The Running of the Bulls takes us to this town during the festivity that has made it famous, as people from all walks of life travel there and hope they travel home in one piece, with no “souvenirs” in the form of nasty bullhorn wounds.This well-known July festival, made famous by Ernest Hemingway in “The Sun Also Rises,” is so much more than just bulls and people running through the streets. There is a full week of fireworks, folklore events, singing, religious festivities and celebrations. But it’s the encierro, the running of the bulls that culminates the festival and is the climax of this show.

Mvt. 1: "Chupinazo v Fiesta" highlights the opening ceremony of the Festival of San Fermin, as the bull running is known in Pamplona. Thousands of people gather to await the proclamation from the mayor that that big weeklong party has begun. This piece captures the energy of all these people, heard in the bubbling of the music as the massive swarm erupts in jubilation at the onset of the huge celebration.
[ Download ]


Mvt. 2: "San Fermin" honors one of the locally venerated Catholic saints, the co-patron of Pamplona and the town's first bishop. Unfortunately, he was beheaded in France, but those who still love him keep his memory alive. This movement fills the town square with a sense of spirituality and reverence.
[ Download ]


Mvt. 3: "Encierro y Corridos de Toros" (literally, "the confinement and running of the bulls"), is the event all the out-of-towners came for. You'll hear two cohetes (rockets) launch, the first announcing the release of the bulls from their holding pen and the second signaling that the last bull has left and is bringing up the back of the swarm of beasts heading towards the runners. The music spectacularly captures the dangerous mix of determined runners and angry bulls, and you'll hear through the fast-paced action an occasional bull getting the better of a runner. Does everyone make it safely to the end? Do any of the bulls "score" a runner or two? Those who are totally out of breath at the end are the lucky ones. As for the rest, it's the ultimate revenge of the bulls.
[ Download ]