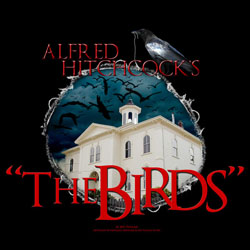 
Mvt. 2: "Arabesque #1 (Debussy)" was cleverly disguised in the film during a scene where the main character, Melanie Daniels plays a few bars on the piano. The Arabesque is a departure from what one would expect from a suspense/horror film. With no threat present, it lulls the audience into a false sense of security. It's the sound of safety and the sound of victory. When compared to the movie, this uplifting track is contradictory in many ways, because we know there is no victory for the main characters.
[ Download ]


Mvt. 3: "Attic Attack" begins with an organ and the distant calling of the birds. It's the sound of impending death and an imminent attack. The sound of creaking steps occurs as Melanie climbs her way to the attic. The anticipation grows feverishly at the moment where the door to the attic is thrown open. "Attic Attack"is launched into an extremely quick pace to show off the relentless onslaught of the birds. This instantly gets the heart racing and forces the listener to fear for the lives of the characters. One never knows if there's safety or danger, and that's the essence of an epic suspense movie. <br />
[ Download ]